Returning structs allows the compiler to detect that the created data does not escape the function scope and decides to allocate the memory in the stack, where the allocation and deallocation is very cheap if compared to managing memory in the heap.

Let's consider a machine to create Donuts with diversity of sizes, shapes and ingredients:

In a 64-bit machine, the above struct would have a minimum size of 4+4+16+1+1+12 = 38 bytes, and I emphasize minimum because some implementations of Go could decide to, e.g. use bigger data structures for booleans or slice/string metadata.

Considering that a 64-bit pointer (8 bytes) is several times smaller than 38 bytes, one may think that the following factory function:

Should be faster than an analogue function that returns a copy of the Donut:

Given the following function:

, and an analogue func RandomDonut() Donut function that is exactly equal to the above function, but returning the Donut by value; we have benchmarked and traced both versions:

For this particular function, returning a value instead to a pointer makes the operation time decrease by 16%, as the following graph shows (lower is better): 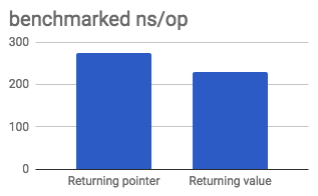 Of course the difference may be different depending on the size of the struct or the total execution time of the function.

The above benchmarks have been repeated and executed during 5 seconds with the -trace option enabled. To allow us inspect the trace with go tool trace tool (see above screenshot).

These results also would vary on other functions. The example function generates a small amount of heap memory to store the Donut toppings.

(Please refer to the TL;DR in the beginning of this entry 😇)