With the arrival of Generics to Go 1.18, a new programming model has arrived to Go: functional stream processing. This post evaluates some current libraries providing such functionality, and compares the achieved performance in single-thread streams.

The first contender is the mariomac/gostream library, which was created by myself. Since there aren't popular or widely used stream libraries in Go, we had to Google for a while to find the other alternatives to compare:

We found some other interesting libraries, but they are not compared here for diverse reasons:

To test the performance libraries, whe choose a simple example using a few subset of operations that is common to all the libraries:

The scenario receives a slice of words and returns a map with a set of anagrams. The pseudo-code would be something like:

The implementations rely on some provided functions:

The different implementations for the anagrams finder can be completely seen in the following repository:

Functional processing might come at a cost, so we also provide an iterative implementation that would act as "theoretically fastest" implementation and would give us a better perspective of the performance of the functional approaches.

The mariomac/gostream library implements the above pseudo-code as following:

Observe that the above pseudo-code defines the whole stream pipeline in a fluent style (the result of a method invocation is immediately invoked without storing it into a variable). However, here we require an intermediate groupedWords variable. The reason is a limitation in the Go generics' implementation that prevents that a Map method returns an element with different type of the argument. So here we need to invoke it as a function.

primetalk/goio would implement anagram finder would be implemented as follows:

You will notice some subtle changes in the different API design decisions.

vladimirvivien/automi does not provide yet Generics' support so you will notice that at some point we need to do a type cast. The API is clean but at the cost of potential runtime errors, since methods accept unchecked interface{} as argument.

And last, but not least, koss-null/lambda is providing an API that is very similar to mariomac/gostream.

Please notice that we limited the parallelization to 1 single worker, as not all the contenders implement parallelization, and this blog post compares the most common single-thread scenario (e.g. willing to keep the order of the resultant streams). 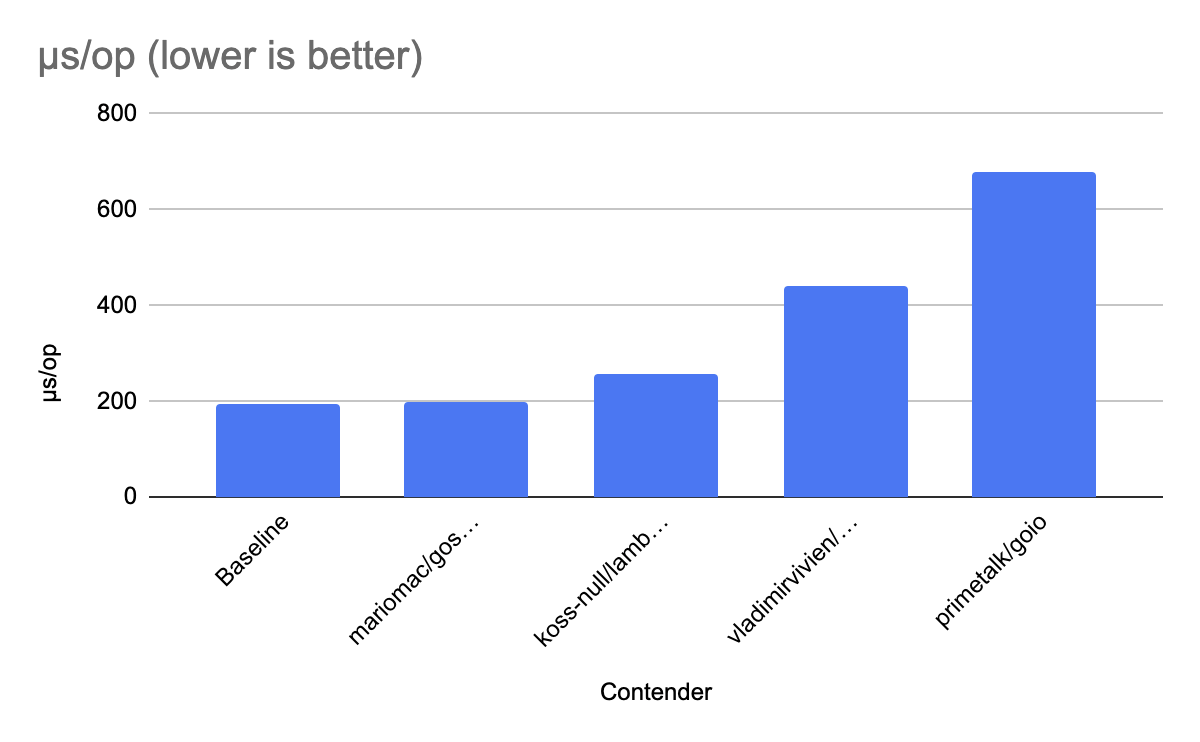 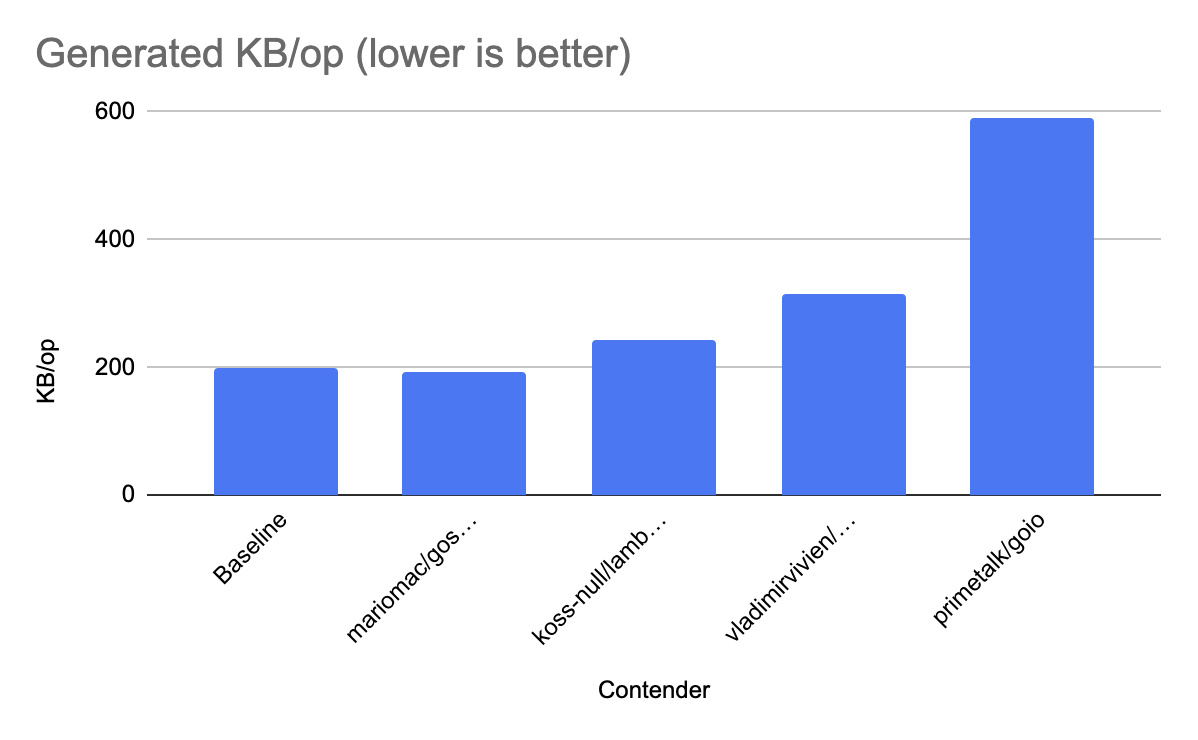 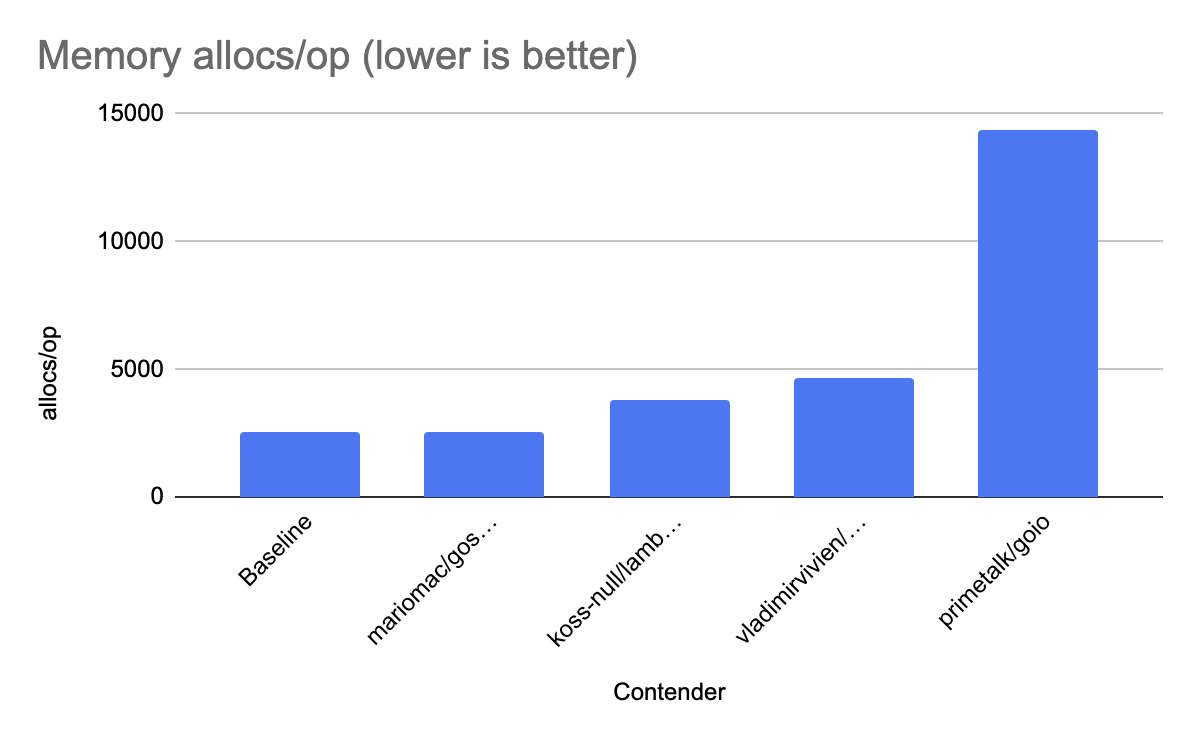 The tests demonstrated that mariomac/gostream is currently the most efficient functional library for functional-like in-memory stream composition. Both in terms of CPU and memory generation.

It was surprisingly near the baseline implementation. However, other dummy micro-benchmarks shown that a functional stream-based pipeline might be several times slower than a proper iterative implementation.

However, other libraries such as koss-null/lambda could beat mariomac/gostream if you enable parallelization, as this feature is not yet available in the later.

I could have missed some features improving the readability or performance of the rest of contenders, or there could be more stream-processing libraries around there that would beat any of the implementations of this blog post. In that case, feel free to leave a comment informing about them and I will do my best to update the post with the new alternatives and results.

A reader of this article kindly contributed with another library that seems to outperform by a smidgen the Gostream library, in terms of speed, with similar memory generation: github.com/kamstrup/fn.

In their own words:

I think the primary difference between our approaches is that you seem closer to Java Streams, and I am a bit closer to Clojure. Fx. my Seq API is designed to work on "immutable sequences", ie you get a head+tail back when you walk a Seq, and the underlying Seq is stateless. Whereas your stream lib keeps a stateful iterator.

Digging into its code, I also see another basic difference: while mariomac/gostream is designed for lazy evaluation of each stream's element, kamstrup/fn performs eager evaluation.